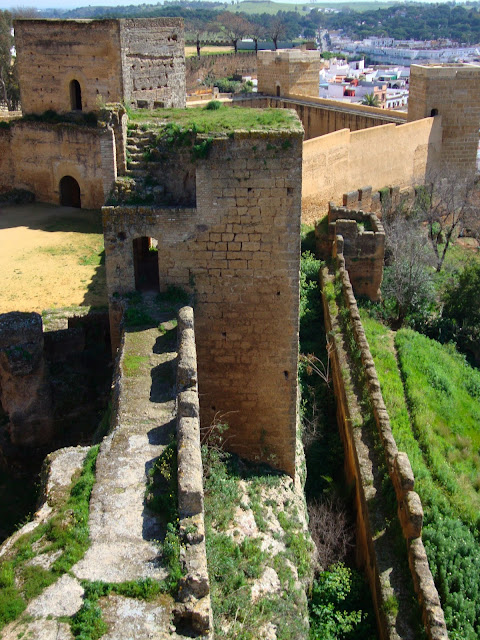 Alcalá de Guadaira is a town just outside of Sevilla.  I’ve been wanting to go there since the fall, when I learned to sing a specific song in flamenco from there, the Soleá de Alcalá.  There are many different types of soleares; many different cities and towns in Andalucía developed their own versions of the soleá.  La Andonda is recorded to be the first person to sing por soleares in the neighborhood where I live now, Triana.  Although soleares may have been sung before her, she is at the least the person to popularize it.  Her lover, El Fillo, would also be known for singing soleares. His nephew, Tomás el Nitri, then brought the soleá to Alcalá when he stayed with the Talega family for a few years. Within that family, Joaquín el de la Paula would create a unique style of singing the soleá, therefore creating the style known as the soleá de Alcalá.
This trip is the first time in a while I’d traveled alone, and it was nice to get out of Sevilla and reflect and think alone, which I suppose is an ironic coincidence since the etymology of the song Alcalá is famous for, the soleá, comes from soledad or solitude…
Here is a great video of the soleá de Alcalá, with some video at the beginning of the city and an interview at the end about Joaquín el de la Paula (in Spanish):

On a side note, my journey started out in a typical Spanish manner:  I arrived at the bus station at 11:40 to catch the 11:45 bus.  Apparently, because of the marathon of Sevilla, buses weren’t going to be running until noon.  Of course there was no announcement of this, not even a piece of paper or anything, and as far as I knew the bus route didn’t interfere with the marathon route.  Some people had been waiting for the bus for an hour already. Uf! (And I thought the MTA in New York was bad!) I ended up waiting an hour and a half for the bus, which should come every half hour.  I almost gave up and decided to go home, but I prevailed–indeed I am learning to be more patient, and to enjoy complaining with the others waiting, because there is a Sevillan art to complaining.

I got off the bus in Alcalá with a great view of the old castle straight in front of me.  I immediately climbed to the top.  I have to say the next best thing to going hiking and climbing boulders has to be climbing on an ancient fortress 🙂 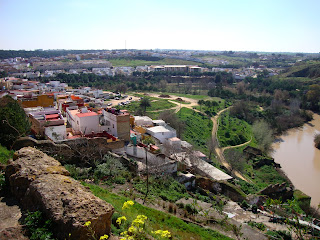 Alcalá’s main industry used to be bread baking.  Although it’s not really known for that any more, it is still sometimes referred to as Alcalá de los Panaderos (of the bread-makers).  There are still remains from the old mills.  Here’s a picture of the Molina del Realaje: 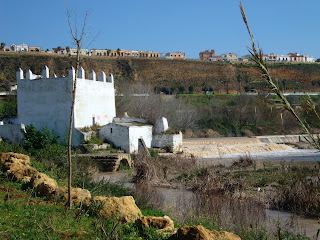 Here’s a view of what used to be the gypsy neighborhood–where the soleá de Alcalá would have been sung: 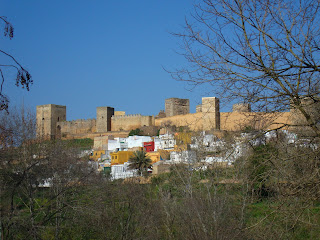 And here are the lyrics of a soleá de Alcalá sung by Joaquín el de la Paula:
Con la pena que yo vivo
No vivían las criaturas
Esta pena que yo tengo
Me lleva a la sepultura
(Animals cannot live
with the pain that I live with
This pain that I have
Will take me to my grave)
Alice Blumenfeld2018-01-11T20:37:34+00:00