A taste of Andalucía in Albuquerque….

A taste of Andalucía in Albuquerque….

It suddenly hit me while waiting to catch my plane to NYC last Sunday night that just the day before I had successfully produced, directed, choreographed (and sold out–albeit a small theater) my first show. Although I’ve performed hundreds of times in my life, it’s a whole different ball game to be the one in charge… 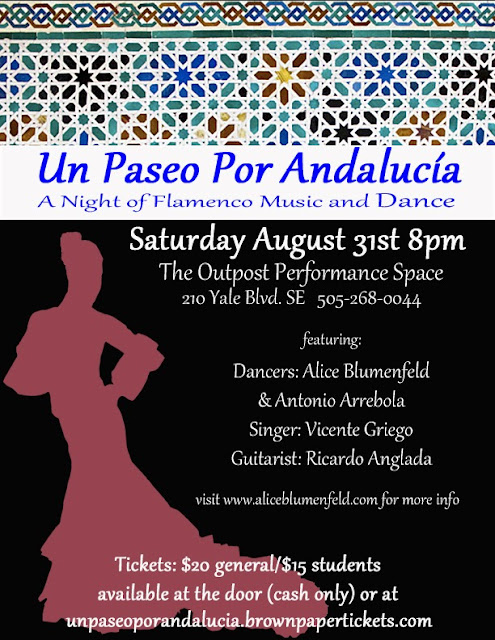 I had a dire urge to perform and put to use everything I had been learning in Spain, so when I decided I needed some down time in Albuquerque with my family before heading back to the big apple, I started looking for a space to put on a show.  Let’s just say I had no idea what I was getting myself into, and there was about zero downtime the few weeks I was home.

Things went incredibly smoothly considering I had never done this before.  That’s mostly due to the fact that the space I rented made my life easy–shout out to The Outpost Performance Space and Tom Guralnick!–the musicians and dancer I worked with are incredibly talented, experienced, hard working and professional, and I had the support and help of my family and my various communities and networks in Albuquerque.

I learned a lot from the whole experience–first that persistence pays off and then mostly to never do it all by myself ever again.  I did pretty much everything, from using photoshop for the first time to make the flyer (learning after spending 6 hours making it that I should’ve set the dpi to a different resolution before I’d started–oy vay!), putting up flyers all over Albuquerque, sending out the press releases, interviewing with journalists, organizing the sound system, organizing rehearsals, buying food to have in the green room for the cast, picking up the other artists….and so much more.  All of that meant I didn’t have much time to rehearse, or even when I was rehearsing, my mind was still on the producing side.  I quickly learned I had to wake up, eat, then head straight to the studio before I could check my email and worry about ticket sales or anything else… 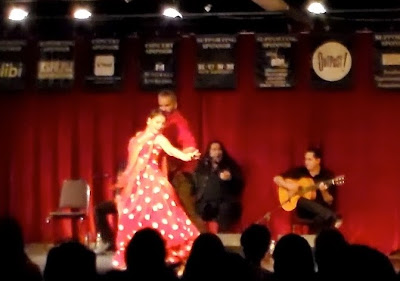 The show was exactly what I wanted it to be; I wanted to recreate the intimate atmosphere that you find at the flamenco peñas in Spain.  What I love about that ambience is the more informal setting (similar to that of the Outpost), the use of improvisation, and the fact that it’s not flamenco for tourists, but rather for aficionados; it wasn’t about fulfilling and selling stereotypes but about connecting first between the performers and then connecting with the audience.  I also wanted to share a variety of rhythms, many of which are not seen often outside of Spain; I wanted to show flamenco’s variety and versatility.  The show was not perfect, but for what it was and for what it was trying to be, it fulfilled my every expectation and desire.

Despite my seeing the show overall as a success, I was disappointed in my own dancing, mainly because I did not have time to rehearse as much as I like to due to all the work I put into producing. That’s not an excuse, but merely a reflection of the process. Watching the video, I danced better than I had thought in the moment, but the one thing that shows my stress is my shoulders.  My shoulders don’t lie; I rarely have a problem keeping my shoulders back and down in my dance technique, but they’re definitely not as relaxed as they usually are since that’s where I tend to hold stress and tension.  So, I’ve learned that being a freelance flamenco and creating your opportunities to perform requires an amazing amount of balance between the production side and the dance side.  At the same time, I had a blast on stage–it became a sort of release and I valued the opportunity to dance even more because I had put so much work into creating it.  And overall, being involved at such a different level in a production gave me a very different sense of presence and dedication throughout the whole process.
There may have been mistakes I made along the way which I have learned from (and that means next time things will go even better–and there WILL be a next time 🙂 and not everything was perfect, yet most importantly I feel like I gave the audience a great flamenco show and shared a bit of Spain and a bit of myself, and that is all I can really ask for.

I could write pages about what I would do differently, but I am overall happy with the outcome. Hopefully it’s the first step to creating my own larger and more detailed theater shows…so much work to do before then!