Are we taking ourselves, dare I say, too seriously?

Home/Dance Profession/Are we taking ourselves, dare I say, too seriously?

Are we taking ourselves, dare I say, too seriously?

The most “flamenco” experiences I’ve had outside of Spain were not flamenco at all. One was a break dance battle at Wayne State University in Detroit and the other was a jazz concert in Albuquerque at the African American Performing Arts Center.

First off–what is “un ambiente flamenco?” I would say it’s an environment, or vibes, or ambience that is conducive to improvisation…a supportive group of people who listen to one another, vibe off each other, support one another through jaleos (cheers of encouragement) or by adding to the soniquete (groove) with palmas (rhythmic handclaps). It’s fun. No one is trying to show anyone up (well, they are, but not in a mean sort of way, they’re just showing what they’ve got). People can try out new songs, new steps, new guitar melodies. It’s a lab for artists to see what works and what doesn’t. Just because it’s fun and laid back does not mean it cannot be serious–someone can sing a martinete or a soleá (two of the more somber styles in flamenco). So it’s really that support and lack of judgement that I think shapes an “ambiente flamenco”…an overall love for the music and dance and sharing that love. (Going back to my post from a few weeks ago–this setting is a spontaneous community, perhaps only together for one evening, a few hours, but nevertheless open and supportive of anyone ready to listen and share with humility).

Video from a fiesta flamenca at the Feria de Jerez, hopefully it gives an idea of the “ambiente flamenco.”

So what was it about these two experience in the U.S. that gave them an ambiente flamenco? For the breaking battle–although it was a competition, the cypher (a circle where dancers can enter and break dance) was clearly a space to share moves, try out moves, see what other people could do, catch up with friends from the region, cheer each other on. Even the nature of the set-up–a circle–is inclusive. Whether or not you were battling, you could stand in that circle, cheer on the dancers, share in the energy. This battle was particularly silly–adding to the usual one-on-one battle some extra challenges and silly elements, for example battling with your shoe laces tied together, or in a costume, or incorporating elements from Thriller, etc., etc. 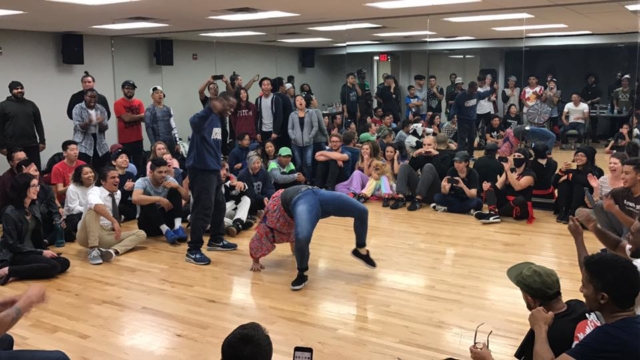 At Superstitious Steez at Wayne State University. Alisyn Hurd (fellow classmate from Hollins University) in the back bend

And the jazz show I saw in Albuquerque: I could see the band having a blast on stage, their energy feeding off each other and the audience’s. The audience shouting words of encouragement. Connection between audience and performers and between the performers onstage. The building of energy, the spontaneity, just jamming for the sake of jamming, not to show off, but just to share the love of music, to share their stories through music. The band was local, and the featured artists from out of town–Danny Kusz and Willie Bradley.

Video of Danny Kusz and other musicians performing…similar vibe to the fiesta flamenca (in my opinion).

I have rarely felt that kind of energy in the U.S. in flamenco “communities.” I think we may be taking ourselves too seriously. Or being too competitive. It’s not that serious–it’s not like we’re surgeons in the ER and this is a life or death matter. Okay, this is a serious art form, with a serious history, and practicing and rehearsing is serious work. But…

Talking to an audience member at a recent contemporary dance performance, we agreed that sometimes dance and dancers take themselves too seriously and it makes the work less accessible to the audience, especially an audience not composed of professional dancers. This particular audience member had danced off and on as a hobby, been to a lot of performances at the university, been roommates with dancers– i.e. a dance aficionado. His reason for coming to this particular show (Esteban Garza’s Identidades)? The choreographer’s love of movement comes through to the audience. You do not have to be “in the know” of the dance world to enjoy his work.  The energy remained elevated through the performance, keeping the viewers drawn in, and Garza’s joy in dance present in all the movements he crafted.  Not that it was just a dance party onstage, though it held that energy; Garza shared his unique history, including complex ideas about forming identity and relationships, across cultures and borders.

Maybe it’s when we get so caught up in lineage and doing things “correctly” we lose sight of the joy, even in the heavy somber moments there can be a love of dance, a joy in expressing. Do we lose the love, or the need to dance? Or maybe we hang on too tightly to the “supposed to’s”–dance is supposed to be this or that, it needs to do this or that, instead of just enjoying it? Letting go, letting loose…vibing off each other and the audience. That requires an immense amount of study in the studio–serious work, so we can then be open onstage to the spontaneity and build in the moment with each other and the audience.