Technique and the Bata de Cola:

My technique improved greatly this summer, much of that due to the great rehearsal directing by Stephanie Ramirez and the opportunity to perform the same pieces so many times and really get every movement correct. My technique, and some bad habits I had also improved due to having to dance with the bata de cola.

On tour, every time we would arrive at a theater, the wardrobe person would always be shocked that we are going to dance in the batas de cola–“they weigh 30 pounds!” Indeed, dancing with a bata de cola is not easy, and worst (or best) of all, if you don’t use proper technique you are bound to get injured. Although one’s instinct is to kick and twist the heavy skirt with as much force as possible, it’s really all about the control and being delicate and feminine with the endless yards of ruffles. Every movement made in your body is magnified by the length of the dress, and in that way, I was forced to really work on minute details of my technique to avoid injury.

If you move you hips too quickly in a bata de cola, or lift one hip higher than the other, the long train tends to fold over on itself, which is something you want to avoid aesthetically, but more importantly, twisting your hips too fast or lifting the heavy fabric by lifting and scrunching your hip into your side or back is bound to cause injury, especially if you are doing that numerous times in a dance and several nights a week. Very few dancers have perfect technique, but dancing with a bata demands good technique because you’re adding so much weight to the movements that pulling your muscles the wrong way could be a much worse injury.

Yolanda Heredia is a dancer in Spain I had the opportunity to study with, and she developed a technique for dancing with the bata de cola after she had some serious injuries because of it. Her warm up and the technique does not exactly look like flamenco–in fact, it probably looks more like a ballet class. She teaches using the hip muscles and alignment, and lifting (rather than kicking) the bata. Only after working in the bata so much this summer did I begin to fully understand her methodology and the idea that movements in a bata come not from the hips or the legs, but have to be initiated from your core and abdominal muscles.

The bata itself has come along way since its initial development–not only in its style and fashion as all flamenco costumes have evolved, but makers of batas have developed it in such a way that it can be much easier to maneuver than batas made even a few decades ago. Though, I have to say, some of the older batas, despite being much heavier, were much better made and tended to be fuller.

I’ve had the unique opportunity to wear a couple of historic batas among the United States flamenco scene. Here’s Maria Benitez in the bata I wore for my senior project at Albuquerque Academy and Carlota Santana in her red bata that I wore on tour this last year. These batas are much heavier than a lot of the ones worn by dancers today.

The making of a bata de cola: 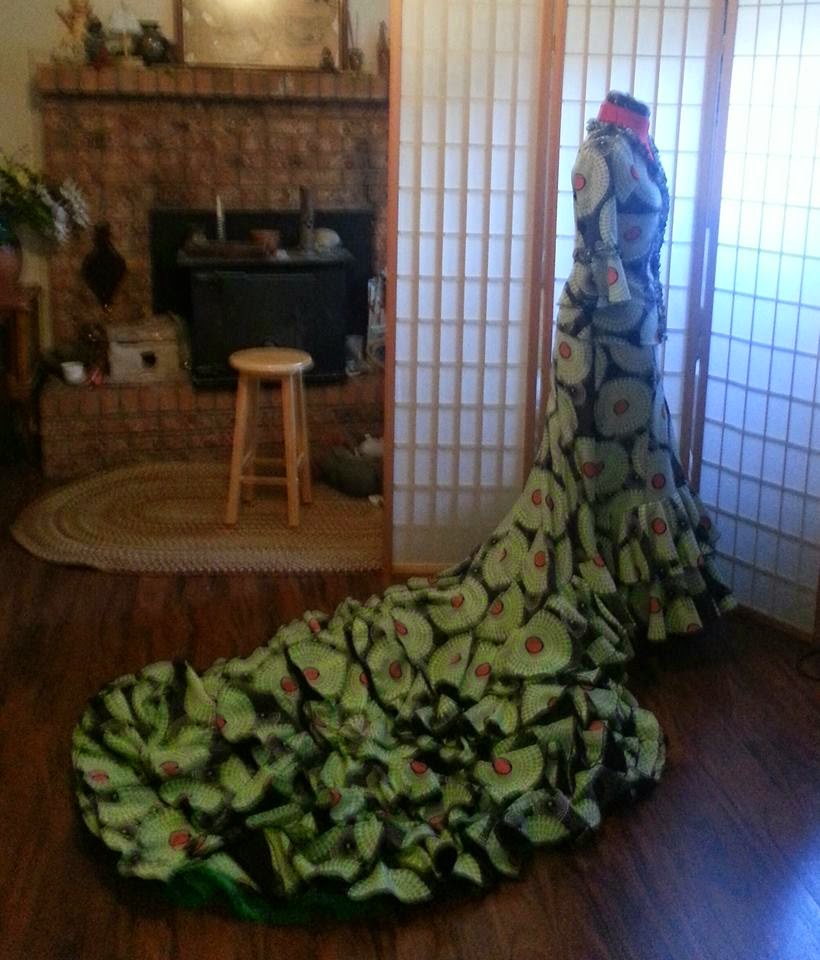 My mother (and master seamstress, check out her website at http://barbarafym.com/details) just finished making the bata de cola below, which I can’t wait to dance in! Making the bata consumed much of her summer, and I had her write a bit about the process of making the bata. Here’s what she says:

“First, one has to understand that a bata is not just another pretty dress.  While the bata should of course be pretty and create a pretty image on the dancer, it has a far greater function and that is to move in harmony with the dancer and the dance.  Indeed, ability to carry out that function is essential for the bata to be a success. I believe that how a garment is made will affect the wearer (think how you feel and how you move when you put on something that seems made for you).  A well-made bata will have that sort of positive effect on the dancer – it will be a partner in the dancer’s dance.  To achieve this, it needs to be well thought out and well executed from beginning to end.
One really does build a bata as it moves from nothing to something almost alive.  It begins with just a conception of what it will look like.  There is the basic shape of all batas, but for the individual bata that shape is only the outline that must be tweaked and developed to meet the needs of the dancer, the fabric and the mental image of the completed dress.  Once envisioned, the seamstress must act as architect doing a variety of measurements and math calculations, creating plans and patterns.  Then the “builder’ takes over:  the seamstress must cut and work with the fabric according to the “blueprints.”  There is an order with which the dress is put together:  shell, flounces, can-can.  Each step needs to be well planned, but those plans cannot be set in stone because as the dress progresses and takes shape the seamstress’s artistic eye must be allowed to demand a change here or there.  That is, the artist must sometimes overrule the architect as the two-dimensional plans and calculations become three-dimensional and fluid and the developing dress takes form.  At the same time the dress must be strong and well-made so that the final product can be functional as well as beautiful:   the dress, beyond being pretty, has to be able to withstand being kicked around (literally); it has to be form fitting, yet both the bata and the dancer have to be able to move; the dancer is going to sweat so the dress must be able to be washed and cleaned.  The bata must be sturdy and durable as well as pretty.  In the end, form and function must meld in order to serve the dancer.
It’s fun to make a bata.  It’s also a hell of a lot of work, much of it tedious.  It’s not easy getting all that fabric under the sewing machine or manipulating and handling the yards of fabric.  But as the bata takes shape and its unique personality begins to emerge, it is exciting to be a part of the process.  Thinking of how you hope the dancer will feel when she first steps into it and when she wears it to dance makes every task meaningful.   The final product is its own reward.  Seeing it in motion, in harmony with the dancer, is the consummate honor.”
Alice Blumenfeld2018-01-11T20:58:28+00:00