Some thoughts on technique…

Some thoughts on technique…

It’s said that in Madrid, dancers have technique and no art, and in the south (Andalucía), dancers have art but no technique. Now, I would not say that statement is 100% true, but it does not come out of nowhere. The best dancers (and artists of any genre) have both technique and arte–and they have also found their own voice–their own vocabulary, maybe even their own technique–in their dancing, no matter where they’re from.

As Eva ‘La Yerbabuena’ said, “La técnica tiene que estar al servicio del arte” (“Technique has to be at the service of art”).

I’ve been working a lot on my technique. A lot. You’d think it might get boring to do the same exercises over and over again, but actually, my hours working by myself in the studio fly. working on technique requires awareness and consciousness, not mindless repetition. Breaking long-held habits takes a great deal of mental effort, not to mention the physical effort of using different muscles in new ways.

Why technique matters:
For me, good technique means you’re free. You’re not held back in any way, and every movement is a choice, not a habit that always comes out. It’s easy to do the movements that look good on yourself, but if you only do those, you’re limiting yourself, and if one day you want to express a different sentiment through a different gesture, you need to have that ability. With good technique you have freedom to make choices–how to use your body in any moment, not I have to move like this because my body does not know anything else… There’s more to that freedom than just technique–exploring, investigating, trying other dance forms, musicality–a lot goes into freedom of expression.

I used my Fulbright grant to study in depth how flamenco dance develops from and with the cante; I studied the cante itself, I studied with teachers who taught how movements and gestures fit with the cante, and I spent countless hours listening to cante. It’s a necessary side of flamenco to study. Right now, I want technique. I’m spending more time working towards freedom from the technical standpoint, though keeping up all the other sides to dance as well…

In the last year, I’d become pretty unhappy with my dancing. It’s not that I was dancing badly, on the contrary, I’d gained a lot of experience after returning to the U.S. in 2013, but last summer I saw how aspects of my technique held back my ability to fully interpret dance movements and to move the way I wanted.

One approach I’ve been using is video taping myself, watching, correcting, practicing, video-taping again. I have no idea what people did before mobile phones with cameras! It makes a huge difference to see your bad habits from the outside. That way, I can be my own teacher, see what I like in my dancing, what is correct, what needs work, where I hold tension that I did not even realize. And it’s a lot less painful than watching videos of performances–also an important tool, but keeping your judgmental self out of that can be difficult.

My end goal, not that there is ever an end, is to dance like myself, find my voice in my dancing, express my stories through dance. Having the technical skills to make choices about my movements makes that possible. It makes exploring and investigating possible.

As Miles Davis said, “Man, sometimes it takes a long time to sound like yourself.” 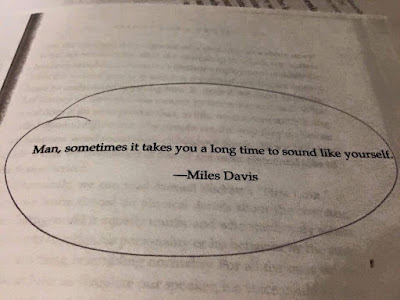