Sounds of the streets

Sounds of the streets

As I walked home last night, I had an urge to run my fingers along the walls of the buildings as I meandered through the labyrinth like streets of Sevilla, as if touching the city’s walls would permanently instill my memories of these streets.  I realized as I walked towards the Setas that I’ve changed a lot over the year and I can never unlearn what this city has taught me, nor would I want to.

There’s something really special about Sevilla’s streets.  To begin with, they are absolutely gorgeous.  The buildings, the street lamps, the balconies with plants, the uneven cobblestones…. 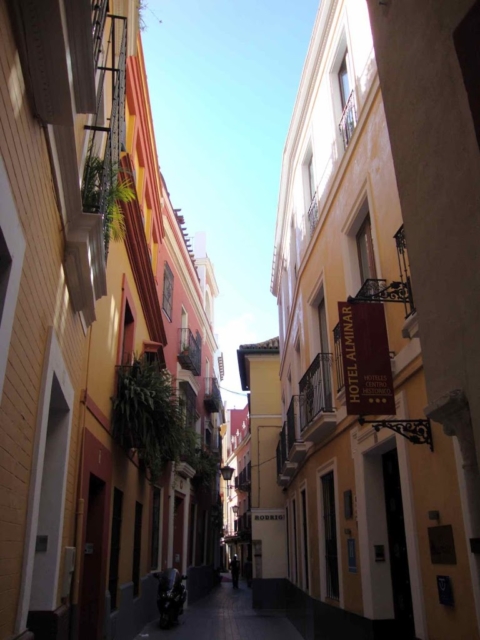 You never know what you’re going to come across.  A couple of months ago I wandered in the Barrio Santa Cruz, the oldest neighborhood in Sevilla, the only neighborhood I can still get turned around and lost in, and I came across the ruins of Roman columns.  How could I have never wandered down that street before to see those?

Then the sounds.  Every morning I hear the guy with the bombonas (propane tanks) walk by, he sings bombooooooooooooooooooooooooooooooooona.  At least once a day I hear flamenco in the streets–someone singing a letra, music from a car, palmas, the notes of a guitarist practicing with his window open.  Then there is the distinct sound of the persianas (parisian blinds) being opened or closed.  At night, you can hear the hum of the nearby alameda–a large plaza where many people go for a drink or tapa at night.
And then there is the sound of silence.  Especially now in the summer, and even more so on weekends when most people leave the city for the beach, Sevilla is like an abandoned ghost town.   It’s so silent the sun’s burning rays almost seem to murmur.  The silence makes you hyper aware of the few sounds there are.  If you read Spanish, here’s a more poetic article describing Sevilla’s streets in the summer: http://www.diariodesevilla.es/article/sevilla/1573095/mucho/silencio/y/pocas/nueces.html

Also the smells.  You can always tell what people are cooking for lunch; nothing more distinct than puchero (traditional stew), or garlic cooking in olive oil….

Then there’s the people on the street.  A stout old man with cigar in hand that brings a cart full of oranges from his orchard just outside Sevilla to a quiet corner in Triana, which happened to be right near the studio I rehearsed in–best oranges I’ve ever had in my life.  The immigrant that sells tissues on the street corner and smiles at everyone, and greets me every morning with “Hola guapa, tómate un cafe con leche conmigo,” I just smile and say, “Hola.”  The other day I ran into a friend on her way to a dinner on a rooftop; I had every intention of going home and getting some rest, but who could say no to offer to hang out with friends with a perfect view of the city, the Giralda, the setas…You never know who you’re going to run into; the flamenco world is small and many flamencos come to Sevilla from time to time–I walked out of my house to run a quick errand only to see a colleague I hadn’t seen in a couple years on my street.  The other day I ran in to a singer I hadn’t worked with in four years–which of course meant catching up over an ice cold cruzcampo.

As I spend my last week writing about what I will miss most here and what I am most looking forward to in the States, it’s becoming much easier to think of things I will miss here than things I am looking forward to….But by far the people I can’t wait to see are my family and friends.  A year is a long time to go without seeing immediate family.